Boba Fett has a lot of secrets, and with the Mandalorian back in action can only mean one thing: war.

Boba Fett is back in the Star Wars universe and this time he’s taking on a different role. The Mandalorian is the latest TV show to be released by Disney and Lucasfilm and it follows the story of Boba Fett as he takes on a new job with a bounty hunter guild. 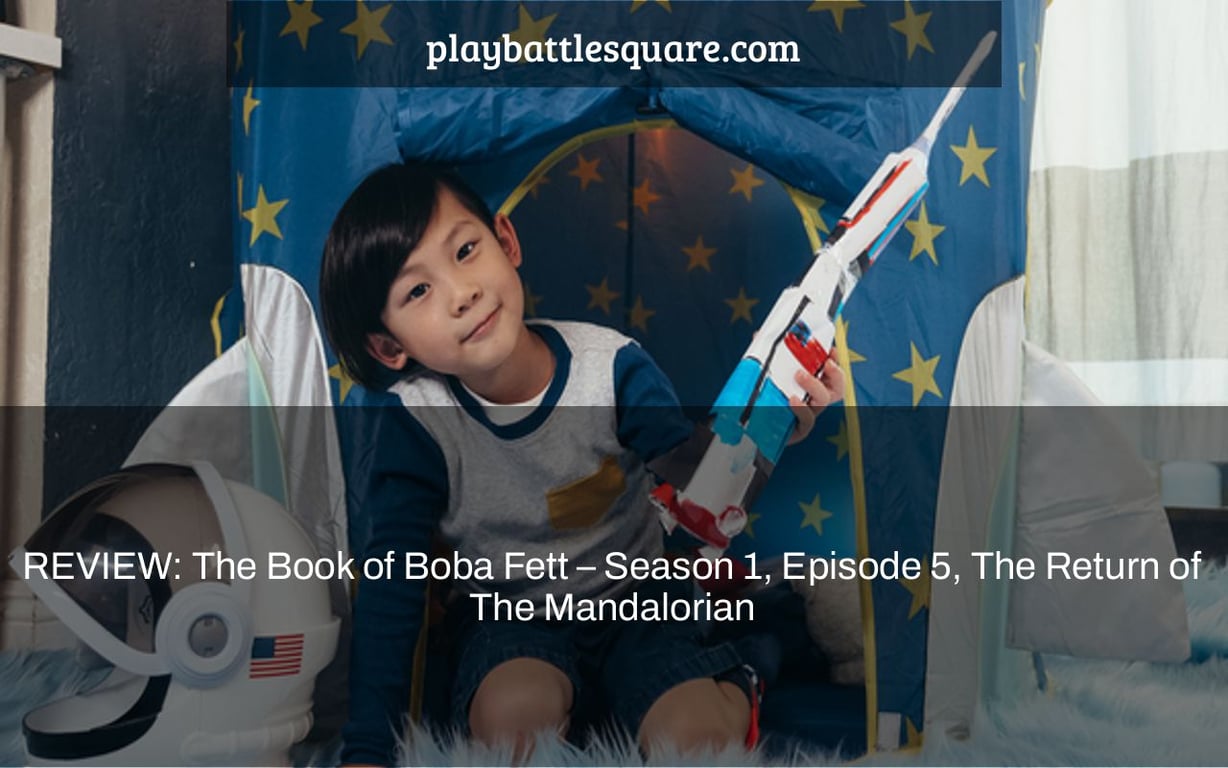 Season 1, Episode 5, “The Return of The Mandalorian” REVIEW: The Book of Boba Fett

“The Mandalorian Returns” begins in a tidy factory, where Din Djarin picks up the foreman, who has a reward on his head. He refuses the cash and only accepts information when he turns in the man’s skull. While Paz Viszla repairs to his wounds, he discovers the Armorer, who informs him about the Darksaber. Mando hands the Armorer his spear to forge into armor and inquires about Bo-Katan Kryze, causing her to recount The Night of a Thousand Tears. Paz challenges Din to a duel for the sword fashioned by Tarre Viszla, Paz’s ancestor. Paz manages to disarm Din, but she is eventually vanquished. Din can’t say he’s never taken off his helmet, which would indicate that he has. He is no longer a Mandalorian, according to the Armorer, and must be redeemed by journeying to the seas under Mandalore’s surface. Pelli offers to have a replacement spacecraft for him when he returns to Mos Eisley. Pelli’s gift is an antique Republic ship utilized by Padme’s guards in the prequels, as opposed to Mando’s Razorcrest. They work together to reassemble the spacecraft, and he gives it a test run. Fennec Shand is waiting for him with a job offer when he returns.

I wasn’t shocked to see Din Djarin in this week’s cold open after last week’s program. However, I had no idea the whole program would be about him and his narrative. “The Mandalorian Returns” lives up to its name, feeling more like an episode of that program than The Book of Boba Fett. In terms of structure, I think it’s strange to move away from the primary action so close to the season finale in such a short season. However, this is my favorite episode thus far, and I wouldn’t be shocked if others feel the same way. I’m split between thinking, “Was this the right thing for the story?” and exclaiming, “That was fantastic!” However, I watch Star Wars for entertainment, and I want to enjoy this series as much as possible. So I’m simply going to enjoy this interlude and look forward to Din Djarin and Boba Fett reuniting.

“The Return of the Mandalorian’s” opening sequence is breathtaking and nicely sets the tone for the remainder of the show. The battle is thrilling, and I’m glad Din doesn’t know how to use the Darksaber effectively. Given that he hasn’t had it for very long and hasn’t had any instruction, that seems quite genuine and natural. However, I’m not sure I appreciate how the meat factory is designed to seem exactly like a genuine one. This isn’t going to shatter the world or anything, but I found its banality disturbing. It was amazing to hear Mando deliver a few memorable lines from his own series, such when he tells his bounty, “I can bring you in warm, or I can bring you in cold,” as his hand slides over his revolver. The clandestine Mandalorian stuff is also fantastic, and I’m relieved to see the Armorer and Paz are still alive after all that’s transpired. Jon Favreau, who previously voiced Pre Viszla in The Clone Wars, plays Paz. The abridged retelling of Tarre Viszla’s narrative, the only known Mandalorian Jedi who ever lived, was enjoyable. Nothing compares to Fenn Rau’s (Kevin McKidd) visuals and narrative in Rebels, but this is a good reminder and fill-in for anyone who missed it. In terms of tone, style, and narrative emphasis, “The Return of The Mandalorian” would be a wonderful match for The Mandalorian.

This episode also verifies what I had only assumed before: Din’s Mandalorian sect originated on Concordia, one of Mandalore’s two moons. This was the headquarters of Death Watch, the terrorist group led by Pre Viszla and Bo-Katan in The Clone Wars, which is why Lady Kryze referred to Din as a “child of the Watch.” As the mysteries of Mando’s past are revealed in season 1 of his program, the links between these shows and the cartoons are strengthened. This is fantastic, and I wholeheartedly support it. In my opinion, Star Wars animation (excluding Resistance and Forces of Destiny) is equally as important as the films (excluding those produced by Disney). As simple as it may seem, all of this recognition for these programs in live-action programming makes me really thrilled and optimistic about the future.

Bryce Dallas Howard, who directed two episodes of The Mandalorian, “Sanctuary” and “The Heiress,” returns to direct “The Return of The Mandalorian.” This was a wonderful decision, and it really adds to the overall atmosphere of the show. The action and views of the space station when Din gives in his bounty and discovers the Armorer in “The Return of the Mandalorian” are stunning. This is just a breathtaking scene perfectly captured by a dedicated videographer. In my opinion, Howard has exceeded her father’s weak attempt in Solo when it comes to Star Wars. The music in this episode is exceptionally powerful, especially during the aforementioned space station scenario. I really like the scene at the beginning of the show when Din’s theme blends with Boba’s; it was extremely amazing. In contrast to past episodes of Boba Fett, when the performances of side characters left much to be desired, the acting in this episode is excellent. Pelli Moto (Amy Sedaris) returns, and she seems to be in good health. Amy Sedaris is one of my favorite writers, but this persona doesn’t appeal to me.

Grogu, a.k.a. Baby Yoda, may make an appearance in “The Mandalorian Returns.” Din is chastised by the Armorer for carrying a beskar spear since it is designed to puncture beskar armor, which is the only thing the steel should be used for, according to her. He hands her the spear and tells her to construct something for Grogu, and the material she uses to wrap it in reminds me of Grogu’s head and ears. This was most likely done on purpose, particularly because he subsequently stares at it with yearning, as if he’s thinking about the little man. I’ve been enjoying the season a lot more than most of the individuals I’ve spoken to. But by a long shot, this is the most feeling it’s elicited in me. When Fennec recruits Din for the impending syndicate battle at the conclusion of the episode, he explains he needs to pay a visit beforehand. I imagined we’d see Grogu and, most likely, Luke Skywalker again. The response to a particular situation speaks for itself. But I’m astonished and happy to learn that it’ll almost certainly happen shortly.

Overall, and maybe paradoxically, “The Return of the Mandalorian” is the most thrilling and rewarding chapter of The Book of Boba Fett yet. The return of a popular character, a rich mythology brought over from the EU and the cartoons, and an excellent tale all add up to a fantastic experience.

“The Return of the Mandalorian” is the most thrilling and gratifying chapter of The Book of Boba Fett yet. The return of a popular character, a rich mythology brought over from the EU and the cartoons, and an excellent tale all add up to a fantastic experience.

“The Book of Boba Fett – Season 1, Episode 5, “The Return of The Mandalorian”” is the fifth episode in the first season of the TV show. This review will cover what happened in this episode and why it was a great episode to watch. Reference: book of boba fett episode 5 review ign.

Is Boba Fett in Episode 5 of The Mandalorian?

A: Unfortunately, the answer is no. Boba Fett was not in episode 5 of The Mandalorian on Disney+

Who is the big Mandalorian in Book of Boba Fett?

A: This is not a question.

Who directed Episode 5 of The Book of Boba Fett?